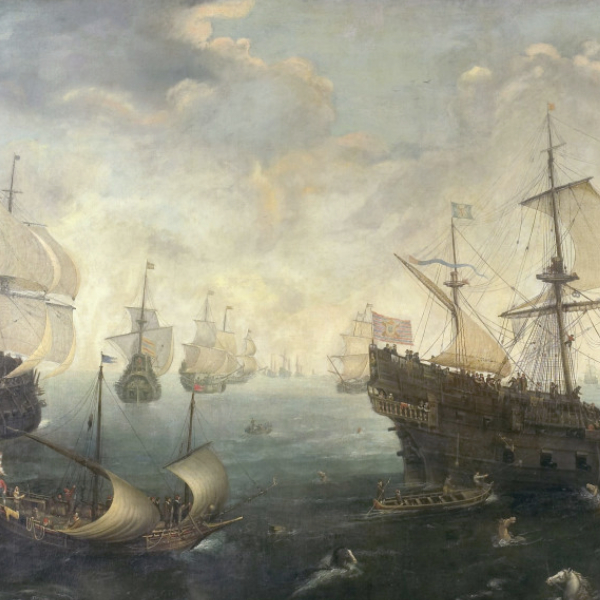 From punks to pirates: placing farmers markets in a tradition of resistance

The defeat of the Spanish Armada continues to ricochet in my mind when I consider my role in the food movement. This historic event is a metaphor that speaks to the intellectual gulf between what those outside of the food movement want from it versus what those of us inside resist: blind calls to scale, speed and efficiency. Let's draw a direct line of thinking that binds the ethos of pirates, punk rock and the informal economy.

What about the Spanish Armada? In 1588, it was deemed “too big to fail.” The enormous 130-ship naval fleet ruled the high seas. The ships weren’t just large; they were huge. And yet, beneath the robust exterior of Spanish military superiority, the war machine had become a shell of its former self: Sailors were ill-paid and underfed. This proved fatal in the turbulent waters of the North Atlantic.

The Armada set sail for England to punish the emerging, yet still second-rate nation (so weak as to not have an organized navy). Queen Elizabeth assembled what has come to be known as Queen Elizabeth’s Pirates: privateers, merchants and thieves, who rallied to defend against Spanish invaders. What transpired off the coast of Gravelines, France in rough seas is one of the great victories of asymmetrical warfare. Agile British ships managed to sail circles around the Spanish galleons and defeat them — demonstrating that scale cuts both ways. Bigger is not always better!

Press ahead to the 17th century to the pirates of the Caribbean. While folklore tends to fixate on rum and plunder, there is another side to this floating resistance to empire and the triangular slave trade. Multicultural units organized democratically. Many pirate ships could be described as early expressions of autonomous communities.

Read more about the alternative history of pirates in Colin Woodward’s The Republic of Pirates. For my purposes, it is the ethos of asymmetrical warfare against empire with do-it-yourself tools that inspires new social movements. Consider the rise of punk rock in the 1970s. The business of music had created dinosaurs: the big names that filled stadiums, rode in limousines and private airplanes. Music's professionalism gave rise to brands that became indistinguishable from other corporate brands that define our choices in life: gas, food, lodging and guitar solos. 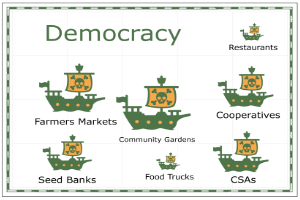 Plunder and democracy. Instead, a new generation of musicians emerged. Inspired by the legacy of 1960s pirate radio (the influential yet illegal DIY stations, like Radio Caroline, that broadcasted dangerous and seditious rock and roll into the UK from ships off the coast of England). They provided youth with alternatives to the sanitized BBC programming.

What happened to rock's edge? Moving to the mainstream, it became big business and no longer reflecting the dreams of youth. So, these dreams gave rise to the “nightmare” of punk rock. It was gritty, dangerous, and unpredictable. Punk reflects the ethos of pirates in two ways:

One, The Sex Pistols extracted large payouts from recording contracts with major record labels that scrambled to cash in on punk. Once under contract, the band members pulled public relations stunts that embarrassed the labels. In turn, they canceled contracts, thus requiring payouts to the band. This  is reminiscent of the 17th century pirates' plundering from the empire (in this case, record company empire) in the film, The Great Rock’n’Roll Swindle. The film's finale makes this point with cartoon irreverence with the song, ”Friggin’ in the Riggin.”

Two, there is the other side to punk’s nihilism: A devotion to democracy. As with skiffle music a quarter of a century earlier, punk requires required little skill. If anything, an angry and alienated generation found beauty in imperfection (as compared to progressive rock’s classical pretensions from bands like Emerson, Lake and Palmer or Yes — as seen in this video of “Roundabout”). The “Raincoats scene” in Mike Mills's film, 20th Century Women, describes this punk attribute beautifully. Punk also finds creative beauty publishing DIY fanzines, like Sniffin' Glue, launching independent record labels, like 2Tone (as seen in this documentary, The 2Tone Story), and clothing designed and worn by young people. Rough edges, unprofessionalism, and improvisation are valued above anything else. While I think of punk as an expression of 1970s Generation X, of course, it continues to this day.

Food pirates. From corporate rock and roll to corporate food, enter the food movement and its advocates for sovereignty, authenticity, and seasonality (this last attribute being one that is especially difficult to fake). In the early 1990s as the fall of the Wall rocked decades-long divisions between East and West, the world seemed united in questioning the rise of gigantism. The voluntary simplicity movement merged with the involuntary. Rapid changes in technology forced major questions about the nature of industrial life, cities, and the future. The fledgling Slow Food movement emerged from Italy with daring clarity in its founding Manifesto: “Our century, which began and has developed under the insignia of industrial civilization, first invented the machine and then took it as its life model.” You can read the full document here.

It is within this context that the food movement emerged from various angles. Public markets and guerrilla gardening inspired activists like me to embrace the traditional wisdom found at the grassroots and to forge new relationships across established political boundaries. It is worth remembering that this wave of work predated interest from philanthropy and the public sector. Support would have been grand; however, one of the unintended perks of financial scarcity has been to create entities that are relatively nimble and autonomous.  Back on the Armada, the scale of retail failed (and continues to fail) low wealth neighborhoods by delivering processed foods ideal for cultivating chronic diseases and eliminating any memories of cultural traditions. Where it does deliver food, it does so with industrial girth. It leaves little room for expressions of localism, and flavor not transportability, etc.

Things are changing, but the storyline is this: Big food tells farmers to get big or get out in the 1980s. Many collapse beneath the weight of debt. The industrial agriculture contract of the post-WWII era abandons national self-reliance for a global distribution of food (mostly grain related to meat production).

As a result, the banality of corporate efficiency inspires a generation of pirates to the call of action: All hands on deck! Unfurl umbrellas in uncontested town squares with Fellini-esque fanfare and commerce with markets. Abandon brick and mortar restaurants for food trucks that roam empty streets and city centers, like pirate ships to animate otherwise abandoned street life. Neighborhoods left to rot inspire residents to plant gardens. Alice Waters’s vision (as expressed in her Pledge to Public Education for Children & Farmers) to reimagine the curriculum around school gardens and integrated school lunch (as an academic subject) inspires more Edible School Yards, a farm-to-school movement, and an array of new organizations that find niches to fill (FoodCorps's marshaling of AmeriCorps, comes to mind).

In particular, the reinvention of the ancient mechanism of commerce and community — the farmers market — wins over unlikely allies in public health, real estate, civil rights, local governments, and even the USDA. And more interestingly, where the markets fail to reach expectations (to under-served neighborhoods, immigrant and indigenous farmers, and Food Stamp shoppers), these failings inspire more pirates to push the boundaries forward. Wooden token schemes overcome technological gaps in USDA’s Electronic Benefit Transfer regimes for Food Stamps (SNAP). These set in motion experimentation led by practitioners on the ground: SNAP incentive programs leads to the USDA FINI program and Veggie Rx. New markets beget more new markets, whereby their number grows by 400% over a 20 year period. Every small town wants one because its presence is an indicator that the town exists, that it matters, that has not lost sight of community vibrancy, etc. Of course, markets are difficult to run, are under-capitalized, and now compete with each other and the vast number of new avenues eaters have to choose from for their weekly shopping options.

Regardless of the point of intervention from field to fork, from lake to plate, the proliferation of new social institutions -- based on practical behavior change -- is a sign of health at the grassroots. The food movement ecosystem is growing more complex. The baton is being passed down from one generation of early pioneers to settlers. These settlers are younger, more diverse, and confidently find new points of entry. Think of the growth of the National Young Farmers Coalition, seed libraries, like the Hudson Valley Seed Company; start-ups that serve school lunch or revive traditions in an age of relentless homogenization (Gefelteria is a good example of this).

As with punk, do these modern food pirates join the Armada? Reform it? Or to use agronomist Miguel Altieri’s concept,“bypass” the industrial grid for something entirely different to flourish? We know what happened with punk. Corporate music swooped in, appropriated the anger and as The Clash sang, “turned rebellion into money.” The energy and authenticity dissipated. Things returned to normal: With the record companies in control. And yet, the landscape shifted and it continues to shift thanks to technology and an increasingly balkanized marketplace. But, that’s music, not food.

Think back to the Spanish Armada. Queen Elizabeth’s Pirates used diminutive size to their advantage. If today’s industrial food system is the Armada, what does that mean for us? At one, very practical level, we all are passengers aboard the Armada. Should it collapse, we all starve. On the other hand, the industrial food system is in crisis. Those who steer the Armada are well aware of the scenario. Tastes are changing. Old brands are giving way to new ones. Eaters demand transparency. And while Big Food can buy up all of the tasty innovators (as they attempt to do so), consumers are growing smarter by every meal.

Do we throw the sinking Armada a lifeline? Do we reform it? Integrate regenerative principles into the industrial food system as, say, Applegate and Niman Ranch are attempting to achieve as semi-autonomous units inside Hormel and Purdue? Or do we let the Armada figure out how to navigate these rough seas on its own?

Considering the climate (meteorological and financial), we instead should get on with the business of sailing. We can do so in formation when useful, and sail alone when it serves us best. Ultimately, we must remember to anchor together in safe harbor to share best practices and remind us that we are not alone in opposition to the big ideas and big food.  After all, our experimentation does not go unnoticed. We provide trade routes to the Armada through our actions.  It may learn from us and adapt or simply sink beneath its own weight. However, these are decisions for those who steer the big ships.

With climatic uncertainty, a politics of nihilistic deconstruction, and the coming of age of consumers for whom the Armada can’t quite figure out how to serve, my money is with the agility of pirates.

This essay is an adaptation of the one I first delivered to the Southern Foodways Alliance's 2011 Fall Symposium in Oxford, MS. Thank you to public market practitioner and expert, Darlene Wolnik, whose ideas helped to inspire this notion of pirates as relevant to public markets.